This week, we’re delving into the paranormal. There’s nothing I love more than a book about witches and ghosts, especially when it’s tied to historical fact. Fellow Musa author, Vera Jane Cook, has joined us to talk about her newly released novel, Annabel Horton, Lost Witch of Salem. Vera Jane reveals some spooky co-incidences about her book and Annabel Horton’s name in her interview. It’s fascinating.

By day I work as an academic consultant for an education publishing company. I live in New York City and take great pleasure in my fantasy life. I write to justify my imagination and satisfy my churning soul. New York City does that to a person, escape is a necessary indulgence.

From the Salem Witch trials through the Nineteenth Century and beyond, Annabel Horton is pursued by the devil’s disciple, Urban Grandier, the demonic priest from the incident at Loudon. She must take the bodies of those that the devil favors to protect her family. She must uncover the motive behind the illusive Ursula/Louis Bossidan, the scandalous cross-dresser who is pursuing her beautiful granddaughter, and she must learn, being one of God’s most powerful witches, how to use her power. But will it be enough to save her husband from Urbain’s fiery inferno? Will it be enough to save her children from demons greater than themselves? Read on, you will learn more…..

Welcome to my blog, Vera Jane. I’m so chuffed to have the opportunity to chat about your book Annabel Horton, Lost Witch of Salem. Where did the initial idea for the book come from?

I woke up one morning with the opening words to Annabel Horton on my lips. I ran to the computer to write them down. Light is not the same to me as it is to you……….. At the time, I was writing another book, my first manuscript, a semi autobiographical tale about three generations of women. Once Annabel spoke to me I wrote them both, spending time on one story and then going back to the other. I enjoyed my own split personality, my need to tell both Annabel’s tale and my own.

What in particular inspired you to write this book?

You know, what really inspired me to write this book was my love for Anne Rice and her vampire novels. I was so intrigued with the prospect of going anywhere I wanted to go without having to make sense of anything. It may be because I’m also Catholic, and death fascinates me, being able to beat death in some way also fascinates me. But even deeper or beyond death there is religion and the great icons of religious history. More than anything, I want to go back in time and see life from the perspective of those that couldn’t possibly conceptualize us. But since I can’t, I assume a knowledge that all time is within me anyway.

What research did you need to do to write Lost Witch of Salam?

I researched the Salem Witch trials pretty extensively and used the actual people that are recorded in history as having been there and died there. I found an interesting correlation to the incident at Loudon and this mesmerizing priest that was able to drive the nuns into sexual hysterics, sort of like the hysterical little girls from Salem. When the book opens, Annabel is confused. She finds her way as a spirit, but when she is between this world and that place where all time meets, she returns with more knowledge and more acceptance of her power. By the end of the book, she enjoys it, this ability to cross time. I hope that in the second book of the trilogy I can write about her power, not her awareness of being powerful, but her actual experience of herself as one of God’s witches.

How did you choose the title for your book?

The title for the book was very interesting. It must have been buried deep in my subconscious, either that or I channel lost souls. My character’s name is in the title. As I wrote I realized my character was indeed, lost. Thus came the rest of the title: Lost Witch of Salem. But what is most interesting about this is that the morning I awoke and began to write, the name Annabel Horton just came to me. I have no idea how I thought of it, but I decided to Google her, and lo and behold I found that a real Annabel Horton lived and died shortly after the infamous witch trials in Massachusetts. I think, sometimes, she told me her tale and vanished, leaving it all buried within me.

That’s a very interesting. I love the idea of Annabel Horton channeling her story through you.

So, who will enjoy reading your book and why?

People who might like my book are a bit eccentric and question whether or not this is it, in terms of explaining life. I mean, science explains it, religion explains it, but is that it? Couldn’t there be some other whole explanation as to how we got here and who we really are? There are people who talk to ghosts, people who have seen the other side and though they don’t explain it well, can we really doubt their experiences? What’s a soul and where does it go? Have we been here before? I think anyone open to questioning the journey we’re all on would like this book. Annabel is a spirit. She calls herself a witch because she can cross time. Well, maybe we all have that ability. Who knows?

Annabel sounds like a very interesting character, what makes her tick?

I’d say being in spirit form makes Annabel tick. It isn’t easy being pursued by the devil. Let’s not forget her vast wealth and her need to protect it. Oh, and that nasty cross dresser makes her tick like a time bomb, the little slippery scoundrel! 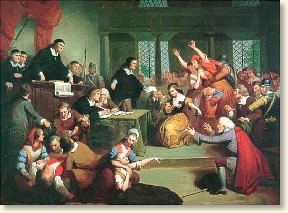 Are you working on another book at the moment? Can you tell us about it?

Annabel Horton, Lost Witch of Salem is the first of a trilogy. The second book is called, Annabel Horton and the Black Witch of Pau. Back in the 1400s and 1500s there were many French witches. The Black Witch is a descendent of a very famous one, Angele de La Barthe, who was from Toulouse and was killed in 1230 for being a witch. The French witches did many things for money, like selling their infants and doing incantations for the King and Queen. They were paid royally for their talents. My Black Witch is not so macabre. Every time she kills she must sing, specifically, an aria. She’s an opera singer for real but she has this ability to concoct potions of great strength. At the bequest of Urban Grandier, she mixes her greatest creation with the sole purpose of doing away with Annabel Horton and those closest to her. It will be a real clash of swords when they do go at it.

That sounds fantastic. I’ll be adding it to my TBR pile.

Vera Jane, how long have you been writing seriously?

I was always writing, not necessarily a novel, but poems, a diary, short stories. I never dreamed in a million years that I would ever consider taking it seriously. As a young woman, I wanted to be an actress, which I was for at least ten years. I drifted away from acting for a number of reasons, but mostly because I was not really well suited for it. At some point, at around my fiftieth birthday I sat down to write a novel. Today I have eleven completed novels, two are published and three will be published this year and next. I discovered myself at fifty; it’s never too late to evolve with life.

And you’ve been very successful at carving a new career for yourself.

Who’s been most influential to you as a writer in improving your craft?

The greatest teachers I have as a writer are other writers. I learn a great deal from good editors but there is nothing like reading a book written by a writer that has learned how to craft plot, develop story line and create compelling characters that live and breathe on the pages. I started reading novels at a very young age, and it was like magic. The book was called Hot Shot. It was about a basketball player. I fell in love then and there. The last time I was in love? Well, let’s see. Before Caleb Carr there was Wally Lamb. Just a week or so ago it was Anita Shreve. Once upon a time it was Oscar Wilde and Collette. Tomorrow I just  know that Nelson DeMille will sweep me off my feet.  But my heart has always belonged to Jodi Picoult.

And finally, as a bit of fun, what is your favourite word?

I like the word persnickety though I’ve never used it in a novel but it just describes so many people I know. I myself am persnickety. Maybe I should create a persnickety character, a feisty old woman, perhaps, or a little young whippersnapper. Hey, there’s a word, whippersnapper – describes my dog to perfection.

Thank you so much for providing us with such detailed answers. I’m sure readers will join me in wishing you every success with Annabel Horton, Lost Witch of Salem.

Subcribe to my blog!

Circle me on Google+